Microlight pilots come from all walks of life with an age range from 17, when they can be granted a licence to fly, to veteran status in their 90s.

Ruth Devlin When Ruth, pictured here with her aircraft and her daughter, asked her husband Peter for a flying lesson for Christmas, he reminded her that she'd almost burst into tears when their plane got caught  in a thunderstorm on the way back from Majorca.

And she reminded him right back that she'd always been fascinated by aviation in all its forms, and may be terrified when faced with the reality, but wanted to try it for herself.

She got her lesson, and excited but nervous, was hooked as soon as the aircraft left the ground. What followed was a challenging but incredibly rewarding process, as at first she laughed out loud at the thought that one day she'd be able to land in an emergency, or fly solo to another airfield, land and come home again.

And then to her delight found herself doing all those, getting her licence and celebrating by flying around all the airfields in her native Northern Ireland, then north to scenic Glenforsa in Scotland.

"It was a glorious flight in clear, calm weather up the west coast and its breath taking scenery, and closing the day sipping a G&T in Mediterranean-type sunshine and watching the world go by on the seafront of Oban was priceless," she said. "It's four years since I fell in love with microlighting, and I think I've found my soulmate. People sometimes ask if I would ever 'upgrade' to a larger aircraft, and my answer is always an emphatic no. The sheer joy and freedom of being able to land just about anywhere (within reason and the law) could never be replaced with the range or endurance of a dull light aircraft. I'm happy where I am. In the air." 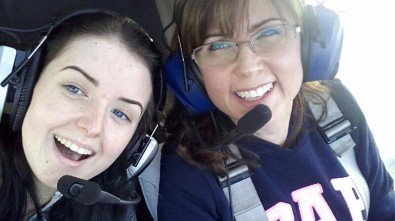 Geoff Hill  Like every little boy growing up, and as you can see from the picture of him he grew a long way at 6' 6", Geoff wanted to be a fighter pilot with the RAF, but finally got around to taking flying lessons when he got some extra freelance work in his job as a journalist and decided to put it into a savings account as his learn to fly fund.

"I did about five hours in Cessnas, then realised the cost was going to bankrupt me and switched to microlights," he said.

"I got my licence for about £2,500, then formed a syndicate with four other pilots which costs as little as £3,000 to buy into. We pay £50 a month which covers all the expenses, and about £25 an hour to fly including fuel, so it's incredibly cheap fun compared to £195 an hour to rent a Cessna.

"Which is why at my local flying club, it's the microlighters who are always in the air, either going for a potter just for the enjoyment of it, or heading off with a mate to a little airfield down the country with a packet of chocolate biscuits as a landing fee, to drink tea and share yarns for an hour, then climb into their little aeroplane and fly home. Nothing better.

"And although some people think of microlights as deckchairs powered by lawnmower engines, today they go all the way up to fast, comfortable machines with heaters which cruise at up to 130mph, have a range of up to 1100 miles, have been flown around the world and over Everest, and can still land at that little grass airstrip down the country.

"There's nothing like it, and even after flying for 17 years, I still get an incredible buzz every time I take off. That little boy who was me would be very happy." 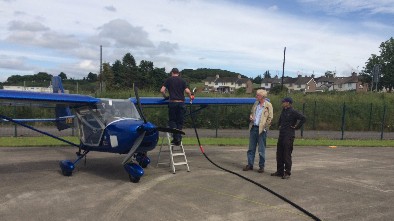 Buy a flight voucher for yourself or someone else today

Today is the day to get started. Follow the link and buy a flight voucher for your first flight at one of the microlight schools that supports the BMAA Flight Training Voucher Scheme.

Professional instructors are waiting for your call.

Choose a voucher
Exactly what is a microlight?
How do I become a microlight pilot?
Save & Close

We use necessary cookies to assist with logging in and out, navigation and other vital tasks. You can disable these cookies in your browser but this will cause this site to cease to work properly.

When we use optional cookies you will be able to turn these on or off in this panel.

This site will set a cookie to remember your choices.

Google Analytics cookies are used to collect and report anonymous information on how you use the site.